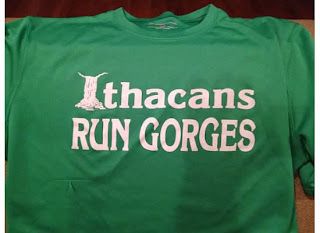 They may run gorges, but it is some tough running.

When Ian Golden, the owner of the FLRTC and director of the Virgil Crest Ultras, announced the inaugural running of the Cayuga Trails 50 last fall, I couldn't have been more excited.  I went to college in Ithaca and always love any opportunity to go back.  I've run the Finger Lakes 50K twice, which is about 45 minutes outside Ithaca, off Seneca Lake.  It's a great event, but I knew Ian would put on a real world-class race, on the trails I used to run in Buttermilk Falls State Park back in college.  Ian announced a $12,000 prize purse as well, and made reference to forming an elite field, so I emailed him and asked him whether I might qualify as "elite."

"Well, it all depends who shows up," he said.

"Who have you asked so far?" I asked.

In the end, the field Ian put together was probably the second-best 50-mile field of the year, after Lake Sonoma.  Dave James (the two-time defending national 100-mile champ), Leigh Schmidt (top-10 WS100 finisher and VT100 CR holder), and Dave Mackey (2011 Ultrarunner of the Year) all pulled out last-minute, which diminished the star power only slightly.  Sage Canaday (quite possibly the world's second-best ultramarathoner), Jordan McDougal (a 14:00 5K runner and three-time winner of the North Face-Bear Mountain 50-mile), Matt Flaherty (winner of the highly competitive American River 50), Ben Nephew (eight-time winner of the Escarpment Trail Run and sixth at the World Trail Championships in 2011), Brian Rusiecki (winner of the VT50, VT100, MMT50, Bull Run Run, and many, many others), Yassine Diboun (Leona Divide 50K winner and 12th at WS100 last year), and Denis Mikhaylov (winner of the Virgil Crest 100 and the Massanutten 100) all toed the line.  The field was so stacked that Sam Jurek (Stone Cat 50 champ) and Jim Sweeney (a 6:06 50-miler and winner of the Umstead 100) got no love in the pre-race coverage.

Lining up for the start next to Jim and behind such an elite group (of women as well; Cassie Scanlon, Amy Rusiecki, Sandi Nypaver, Kristina Folcik, Debbie Livingston, Sophie Limoges...) I knew, obviously, I would not be contending for a podium spot.  Starting among such a field was a bit intimidating--this was a deeper field than any national championship race I've ever run--but also liberating, in that it freed me to run my own race.  I wanted to focus on staying mentally strong, avoiding down periods, and staying on top of my fueling.  If I could accomplish all this, I figured my placing would take care of itself.
The difficulty of the course also freed me from having to worry about time.  With a reported 10,000 feet of climbing, it was not a day for a PR.  This too helped me focus only on myself and let the race come to me, rather than worrying about hitting any particular splits.

The opening pace, as expected when you've got a field full of studs, was pretty quick; I let the large lead pack go and ran in about 20-25th place for the first mile, uphill, in 7:50.  The first 5K section to AS 1 was a basically uphill jaunt up the Gorge Trail to the top of Lucifer Falls, immediately showcasing the spectacular scenery Ithaca trail runners know well.  I was happy enough to maintain 9-10 minute pace and just try to let the early miles pass.  At about 5 miles Jim and two other runners went by me quickly; they had made a wrong turn earlier and Jim explained they lost about 1/4 mile before getting back on track.  (At least that's what I think he said as he blew by.)

I reached AS 2 feeling fine, right around 1:05 for 7 miles, around 9 minute pace.  Looking at the course profile I thought 8 hours--just under 10:00/mile--would be a good day for me, so at this point I was pretty pleased.  Leaving the aid station I immediately caught up to women's leading and pre-race favorite Cassie Scanlon.  Cassie has been tearing it up this spring, with wins and course records at both Lake Sonoma and Ice Age, so I knew if I could run with her I'd be in good shape.  She was clearly laboring with what turned out to be a bad hamstring pull suffered on a fall in the early miles, but she hung tough for quite awhile, and we basically traded spots back and forth for the next two hours or so.

The course was beautiful.  One of the things I love about trail running in Ithaca is the balance that the trails tend to strike between difficulty and runnability.  Much like the singletrack around Cornell's campus or the trails I ran at the Virgil Mountain Marathon a few years back, these trails were challenging but runnable.  Unlike alot of courses I hate, I rarely felt forced to walk by the terrain, and it was great to find some areas where I could really slip into a nice steady rhythm.

Coming back to complete the first lap, I felt very strong.  Kristina Folcik caught me, and then Cassie, on a long downhill section near mile 18; the three of us ran together until Cassie fell back (eventually dropping after the first 25 miles) and Kristina pulled away very strongly; I wouldn't see her again for the day, though I was able to catch up with her fiance, Ryan Welts, an excellent mountain runner who was crewing for her.  I hung within a few minutes of Kristina most of the rest of the way and so was able to chat with Ryan at many of the aid stations; always fun to see a friendly, familiar face.  As we descended the gorge steps retracting our path to the start to complete the first lap, I picked off a number of faster starters, including a few who had gone by me between aid stations 1 and 2, and rolled into AS 6, the start/finish area, right around 4 hours, feeling tired but strong.

Lap two started off a bit slower than lap one and I had already surrendered three minutes to my first lap split by the time I reached the top of the gorge at 28 miles.  I tried not to worry about splits and just focused on getting nutrition in.  I had worked out a nice system of trying to take in 1-2 GU Roctanes between each aid station and then replenishing them at the next stop, along with filling my handheld with GU Brew each time and drinking some extra fluids in each aid station.  This, combined with a steady intake of S! caps, worked pretty well.  I'm not going to say I felt great the rest of the way, and I certainly spent my share of time walking on the uphills, but I never felt like I fell behind on the nutrition or completely hit the glycogen depletion wall.

The course got pretty muddy--two hundred runners traversing a double out-and-back on wet trails will do that--and my pace slowed throughout the second lap, though I was able to find a nice rhythm in some spots.  I was passed by one runner leaving AS 8 (32 miles), but otherwise saw no one between the 25-mile turnaround and the finish save for two runners who passed me in the final two miles (including women's runner-up Sandi Nypaver).  My GPS battery barely made it to the finish, and felt it necessary to warn me that it was running low; for the final 6 miles my watch display simply read "LOW BATTERY," which didn't help my split times any.  But I held it together as best I could for an 8:47 and a 16th place finish.
This was my slowest 50-mile ever--and also probably my best one.  Unlike every other attempt I've had, I was never stopped or reduced to a walk by "The Wall" or by overwhelming fatigue.  I certainly slowed down a ton, but my second lap was less than 20% slower than my first--not ideal, but not horrible either, and a reasonable showing on a difficult, muddy course.  If I could have held it together a bit better over the final 15 miles and maybe squeezed into the top 10-12, I would have been thrilled, but as it was, I finished the day pretty happy with the way things went.

As I said after Rock the Ridge, every ultra is a learning experience.  I had several good lessons to take away from the CT50, mostly in terms of nutritional strategy and pacing. I have several areas to improve, mostly in terms of training/preparation and mental toughness.  But I'm getting better.  I'm looking forward to enjoying the next few months (a trip to Spain, sans kids, for our 10th anniversary; what should be fun racing trips to Maine for the Great Cranberry Island 50K and to Lake Placid for the Whiteface Hill Climb).  Part of me, though, is already thinking about the next time I'll line up against a truly national-class field, likely at the Tussey Mountainback in October.  Lots of work to do before then.

Thanks to Ian for putting on a great race.  From the course markings to the aid stations to the field to the post-race spread, truly a world-class event in every respect.  Thanks to the aid station volunteers who were incredibly friendly and helpful.  Pulling into AS 8 at 32 miles, I asked for some Vaseline to help with some, um, chafing.  They didn't have any, but one of the volunteers produced some shammy cream, which did the trick.  And I'll be damned if when I return to the aid station eleven miles later there wasn't a tub of vaseline waiting there for me.  Way to go, guys.

Posted by gunksrunner at 7:37 AM

Email ThisBlogThis!Share to TwitterShare to FacebookShare to Pinterest
Labels: Cayuga Trails 50, Race Report, Running, Ultra
Newer Post Older Post Home
"All I want to do is drink beer and train like an animal."
--Rod Dixon