Perverse, in a shoe way 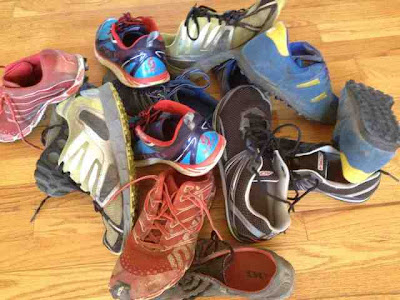 I may have a problem.

It wasn't always this way.  In high school and college, I almost never changed shoes, and I never collected them.  My usual modus operandi was to acquire one pair of training shoes and run in them until they disintegrated.  I will grant you, I took this to extremes, some might say unhealthy extremes.  A single pair of shoes could last me upwards of 1200, 1500 miles.  My shoe maven friends cringed.  But I was happy.  Oh, was I happy.

It was in my post-collegiate years that I started, for lack of a better word, hoarding.  At first it was just the availability of the shoes.  I was hanging around the Haddonfield Running Company, a fantastic specialty shop in South Jersey, and sometimes running for their store team.  Shoes were plentiful.  I acutally started wearing racing flats for some track workouts.  I think that may have been what did it.  Then, I owned a shoe store for two years, which gave me an excuse to try all different kinds of shoes, all the time.  Now I can't go back.  Sometimes they're free, sometimes they're discounted. I almost never pay retail.  But somehow, I get them.

Right now there are thirty-four pairs of running shoes in my house.  I have thirteen pairs of Inov-8s, four New Balance, three adidas, three Brooks, two Asics, and assorted others. I have seven pairs of racing flats, including four brand new pairs of cross country or track flats that have yet to see the outside of their boxes.  I count nine pairs of shoes that are seeing some sort of regular use, and ten pairs that have been worn less than five times apiece.  I have seven pairs of shoes that have too many miles and too much mud on them for any further running to occur.  I have a pair of Brooks Adrenalines from 2008 with sheet metal screws drilled into the soles.  I have the black Nike Air Prestos that I wore to my wedding.  I have two pairs of shoes that I actually gave away to people and yet are somehow back in my house.  I have a pair of fell running shoes from Bolton, England that cannot be purchased in the US.  I have three pairs of Vibrams, for god's sake.

I can't help myself.  Two weeks ago I walked in to Rock and Snow to take a look at the Hoka One Ones (which I'll buy at some point, trust me) and left with an on-sale pair of New Balance 1010s because they were in my size.  Right now on my phone's "To Do" list, I have reminders to try out two other pairs of running shoes that I don't even own yet.

Which reminds me, if anyone wants to send me a pair of Montrail Fluid Flex or Salomon Sense Ultras, I wear a 10.5.