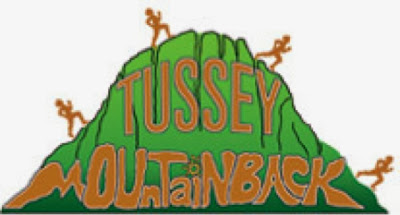 As I drove down to Pennsylvania last Saturday in a steady rainstorm, I suddenly heard a tap-tap-tap on the rear window of my car.  I looked in my rear view mirror just in time to see my antenna, flapping wildly around and smacking the back window, fly off the car behind me onto I-80.

I probably should have turned around right then.

I came into the Tussey Mountainback feeling strong and confident, if a little ambivalent.  My training had gone quite well in recent weeks, with a nice 8-10 week buildup peaking with a three week stretch right before the race of 310 miles, with some solid hill climbs and a weekly tempo workout that had generally been acceptable, if not scalding fast.  I was having a hard time committing to the race mentally--I didn't even register until the very last minute--but as the race approached I felt enthused about the idea of mixing it up with some of the big dogs at the 50 mile national championship.  I set a goal of under seven hours, which I thought might get me into the top ten.  On race morning I scribbled the aid station splits for 8:15 pace, a 6:52, on my arm, and got ready to roll.

The race starts and finishes at the Tussey Mountain ski area outside State College, in the Rothrock State Forest, and climbs immediately after the start at a steady grade on dirt roads for the first 3.5 miles or so.  I settled into a very easy rhythm at 8:20 pace on the uphill, cresting the hill at AS1 with a group of four other runners in the top 15 or so, feeling very comfortable.  At that point the course dropped straight downhill for the next 5 miles or so, at a gradual, runnable grade.  Rather than put the brakes on, and tear up my quads even more trying to force myself to run the downhill slowly, I focused simply on floating a lightly as I could and not worrying about the pace, which dropped down into the 7:00-7:10 range for this stretch, until we moved into a rolling section with some climbing between 10-15 miles.   Conserving effort was the name of the game, and I felt like I was doing a really good job of it.  Everything felt very easy as we dropped back down another long descent to the 20-mile mark, which I reached in 2:33.

At this point I finally decided to make a pit stop, which cost me three minutes.  Of concern, this was my third trip to the restroom of the morning, which did not bode well.  In retrospect, I had started having some GI issues the night before, and had not thought too much of it; but in light of what happened later, I think I just built up too big a calorie and fluid deficit to recover from.

After leaving AS 5 at 20 miles, we started the toughest climb of the day, over 1300 feet of elevation gain at a steady unbroken grade for nearly four miles.  I came out of the port-a-potty expecting some tightness, but had none and quickly settled back into a strong tempo, alternating walking and jogging for the first part of the climb, but then just running at around 10:00 pace over the next couple miles.  I passed a few faster starters midway through, including Jason Bryant of La Sportiva, who would drop a few miles later.  I spent this stretch constantly monitoring my legs for any signs of tightness or distress, telling myself I had plenty of time and would walk at the slightest hint of fatigue, but it never seemed to come.

At least not during that climb.  And over the next few downhill miles, it seemed like it might not, as I passed halfway in 3:23 and 26 miles in 3:30.  But on a long downhill stretch on the way into AS 7, I started to really feel it.  I tried pushing some more calories and continued through AS7 and past the 30-mile mark at 4:04, but my struggles were starting, and despite everything I did--walking some spots, eating more, salt tablets, drinking fluid--I couldn't get my rhythm back.  I made pit stop #2 at AS8 (32 miles) and took an extra gel and a banana leaving the aid station, but the next three uphill miles to AS9 took over thirty minutes, and as I pulled into AS9 a string of runners went past me.  Another one-mile uphill to the 36-mile mark, which I walked the whole way in 17 minutes, then a four-mile downhill jog at 9-minute pace to 40 miles in 6:04, relay runners streaming past me; and a final half mile walk into AS10, where I officially confirmed what I had conceded privately for the past hour.

Lessons?  Sure, I guess.  My first instinct after a race goes poorly is to look at my training for some deficiency, but I don't think that was the case.  I came in fit (for me), with a solid mileage buildup and some good workouts thrown in.  The week before the race, in one of my last hard runs, I crushed a three-mile uphill climb that I've run hard countless times before in one of my fastest splits ever.  Maybe I didn't have quite as much of a taper as I should have, but the buildup was only two months long, and I don't think there was so much accumulated fatigue that a long taper was necessary.  I don't think fitness was the issue.

Race strategy?  To some extent, maybe.  I was certainly out quicker than I would have anticipated--about 10 minutes faster at the 20-mile mark than I had planned.  But that 10-minute cushion was due solely to the course itself, which presented a ton of downhill from miles 4-20.  I don't think holding myself back and incurring extra pounding on the downhill just to keep the pace around 8 minutes for the sake of hitting the right splits would have served my legs any better.  Maybe I'm wrong, but I don't think I screwed it up that way.

I keep coming back to two things: nutrition, and mentation.  As I said before, I think my GI issues put me in too big a hole to climb out of, in terms of calorie and fluid depletion.  Not much to do about that.  From a mental standpoint, I mentioned my ambivalence about the race coming in.  For some reason--fatigue? work stress? I'm not quite sure--I just couldn't get as excited and focused about this race as I should have been.  Even early on, when things were going well, I wasn't reveling in it or enjoying it; my attitude seemed to be, "Just keep this going and it will be over soon."  I don't think I blew up because of this, but when the legs gave out on me, I definitely didn't feel like I had enough incentive to dig deep and suck it up enough to get through.

And I'm not sure how terrible that is, necessarily.  I think if I can recognize it and try to learn from it, that might be OK.  I've now DNF'd in half of the 50-milers I've started--twice from real injuries, twice from just blowing up like this one.  There is a school of thought that says nothing is worse than dropping out.  I think to a certain extent that's true.  Dropping out sucks, it really does.  But I also don't know that there is alot to be gained, for me personally at least, by walking for two or three hours at the end of a 50 mile "just to finish."  Yes, I could have walk-jogged the final 9.5 miles of the race.  I probably could have maintained a 15-minute pace, which would have put my finishing time somewhere in the 8:30 range.  Which is fine.  Respectable even.  But I came to this race specifically to run fast and to compete with some of the best.  It didn't work out that way, but I'm not sure I'd feel any better about the experience if I had spent an extra two hours walking the final 10 miles.  I just don't think that gives me any added satisfaction.

As usual, I'll try to take these lessons and apply them for next time.  I can say with some certainty that "next time" will not be a 50-miler, at least for awhile.  I'm going to stick to shorter ultras for now and try to mix in some shorter, fun stuff.  Riding back to the start/finish with some of the relay runners really reminded me how much fun the sport can be, and I've missed that a bit recently.  For next year, I'll focus a bit more on races that suit me, try to run some shorter uphill races, maybe a relay or two, and maybe just one 50-mile, if at all.
Posted by gunksrunner at 6:31 AM