Since Mount Mitchell in February, this has been almost a lost six months for me on the training and racing front.  My fitness level has been consistently mediocre.  I ran a very uninspired race at the Mount Penn Mudfest in April and otherwise have only two "races" to my name: a two-mile road race on St. Patrick's Day that I ran only for the chance to win a year's worth of free beer (which I lost by one second); and the Montrail Uphill Challenge at Western States.  I had plans to race the Prospect Mountain Hill Race, the Ice Age 50K, the Loon Mountain race and the Cayuga Trails 50M, none of which actually happened.  More upsetting is the fact that I've just felt consistently poorly for at least several weeks.  There are a lot of factors.  The weather, for one, has taken its toll on me.  I generally run poorly in the heat and am notoriously slow at acclimatizing; the past few months have been particularly tough for me in that regard.  Not helping that has been my so-so fitness level and the fact that I'm about 10 pounds heavier than I'd like to be, due to a terribly stressful May and June that saw me running must less and eating much worse than normal.  Even taking all this into account, though, I haven't been able to explain the lack of pep and the absence of motivation I've encountered in the past several weeks. Part of it might be related to canceling all those races, which has a de-motivating effect.  But I can't tell if it's a combination of all these things (pretty likely), or if there is something underneath everything.  I went to my doctor two weeks ago for a panel of blood tests, which all came back pretty normal, so that's good, and the past two weeks or so is probably the best stretch of training I've had in two months.  So maybe the worm is starting to turn.  [UPDATE: You can skip to the bottom of this endless, pointless post to find out what the problem is!]

Two weeks ago I jumped into the Survival Race, one of the myriad obstacle course races (OCRs) that are currently infesting the country.  I had a brief fling with OCRs a few years ago at the Warrior Dash, and since I've been a little light on the blog, I'll regale you with my interminable Warrior Dash story before I wrap this up here.

Warrior Dash is one of the first OCR series and arguably one of the most successful, at least from a numbers and financial standpoint.  They started with one race in 2009, grew to about ten in 2010, and now have 35 races spread throughout the year, many of which are two-day affairs.  Each site will see between four thousand and ten thousand runners for the weekend, split into 500-person waves, cover a 5K course with 10-14 obstacles.  Nowadays Warrior Dash is viewed with some contempt by "serious" obstacle course racers who deride it for being too short, too easy, or not electro-shockey enough, and it seems that Spartan Race and Tough Mudder have drawn away a lot of these uber-competitive Crossfitters; but Red Frog Promotions certainly doesn't seem to mind cashing the millions of dollars laid out by the less discerning members of the species.

ANYWAY, when Warrior Dash first came to New York in 2010, I ran it with a bunch of friends from New Paltz.  Several things attracted me that first year.  First, it seemed like a fun idea--obstacles, mud, beer.  Whatever, looked like a good time.  Two, it was at Windham Mountain, which is only about an hour away and would actually set up pretty well for me as a race course, given that it would involve climbing up the ski slope for the first half of the race.  But the part that really had me excited was the helmet: 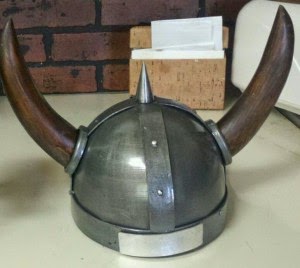 The top three is each age group received small helmet-shaped trophies, which were pretty cool, but the top three overall got actual, full-on, life-sized metal viking helmets.  I was all in.  Top three in a race with over 9,000 people seemed unlikely, but I figured the race would attract a lot of non-competitive people out for some good time and beer, and with the uphill start, maybe I could pull it off.

Long story short (too late!): That first year, in 2010, we rented a slope-side condo with some friends, hung out until late drinking the night before, and then woke up to run the first heat of the day, when the course would be clear and we'd have the best chance of a fast time.  I won the wave by about 45 seconds and then stood around all day waiting to see if the time would hold up; it did for several hours, until I got knocked back into third at around 1pm, and then into fourth at around 4:30, just before the end of the day.  The next year was a similar story: won the first wave of the day; waited around to get knocked off the leaderboard late; wound up fifth overall; went home with an age group trophy for the second year in a row feeling very disappointed.

In 2012 I was ready to swear it off, but the lure of the helmet was too much to resist.  Rather than subject myself to the ultimate torture of running early and then waiting around all day watching the leaderboard, though, I decided to drive up late in the day and just run the last wave.  The course would be crowded, but at least I'd know right away where I stood.

The course was packed from about the one-mile mark on, but I navigated my way quickly through some very crowded obstacles without losing too much time.  When I crossed the line I had a pretty good idea that I had done it, and within half an hour or so I confirmed it: I had won!  I couldn't believe it.  After three years of trying, I was going to have a viking helmet.  I sipped a beer, waiting for the awards ceremony, trying to contain my excitement until my name was called.  And I reached the podium, and was handed...a crappy plastic mug and a keychain.  Those cheap fucking bastards had gotten rid of the helmets.

There's a great scene in Jerry Maguire where Rod Tidwell tries to tell Jerry his Reebok story, which he eventually boils down to: "Fuck Reebok."  That's my Warrior Dash story.  Fuck Warrior Dash.

So, obviously, that was it for me and OCR.  The nurses at work were awesome, they pitched in and bought me a real helmet for my birthday: 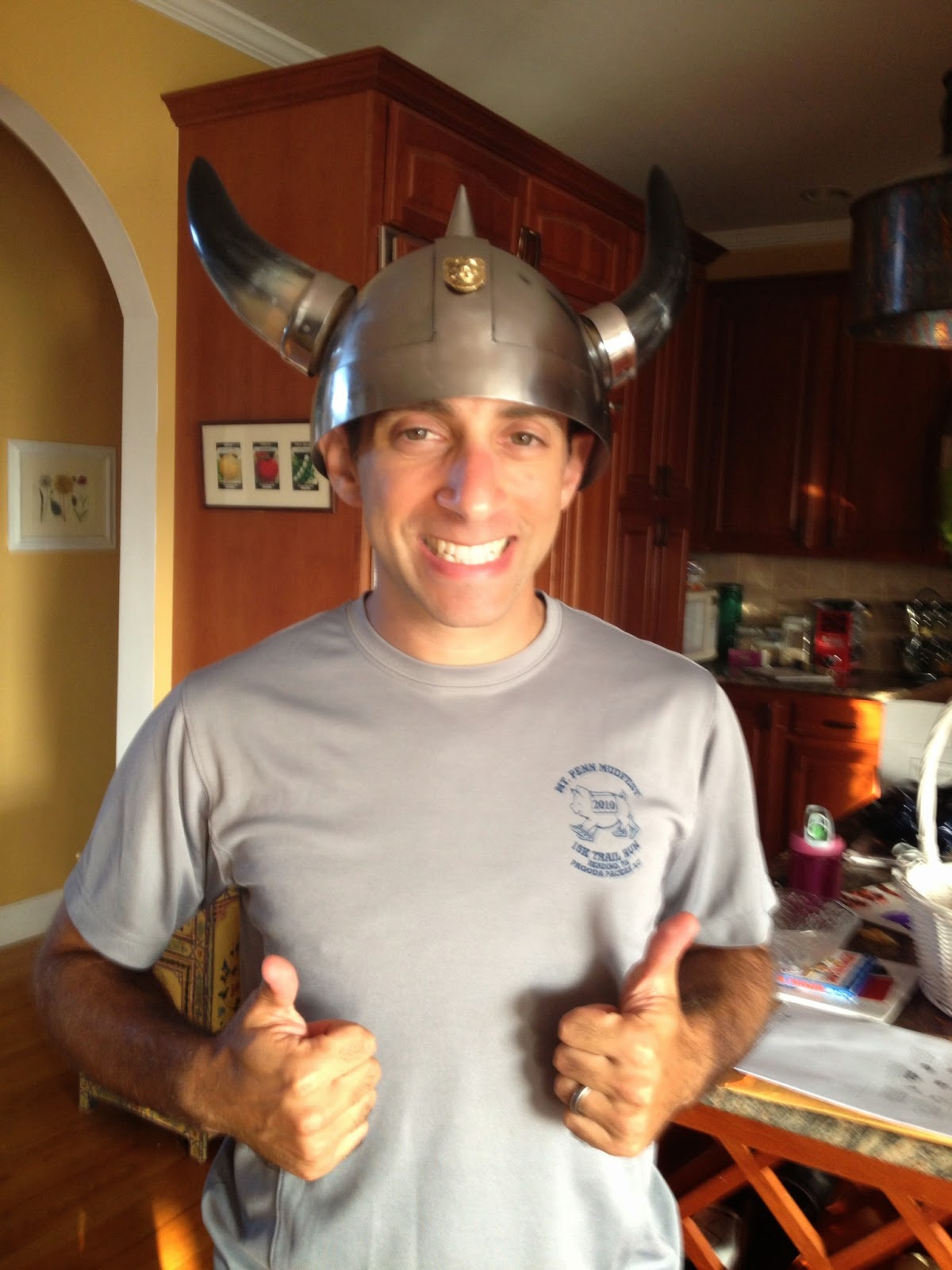 So when they asked me to join their team for the Survival Race this year, I kind of had to do it, to pay them back if nothing else. 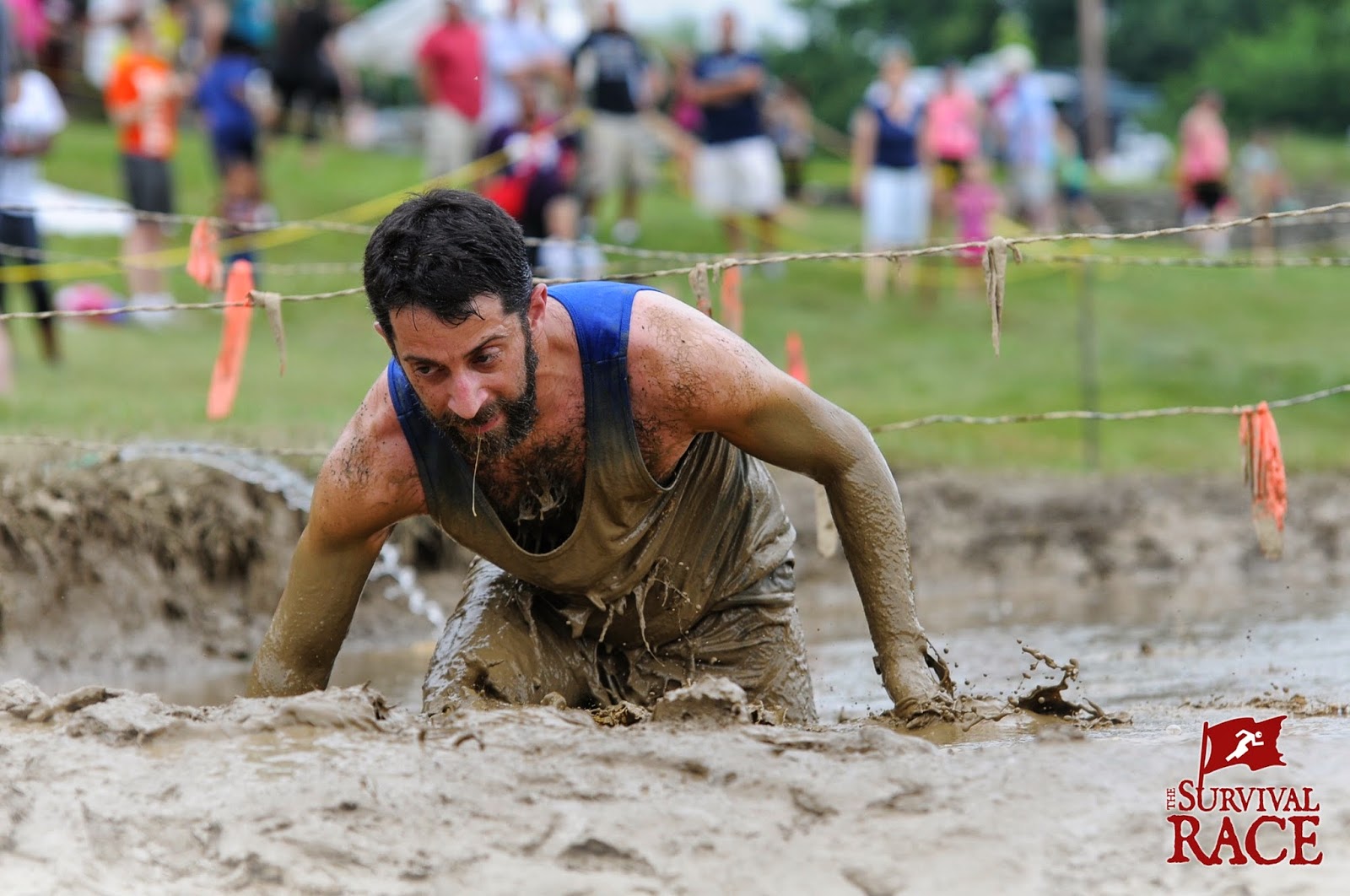 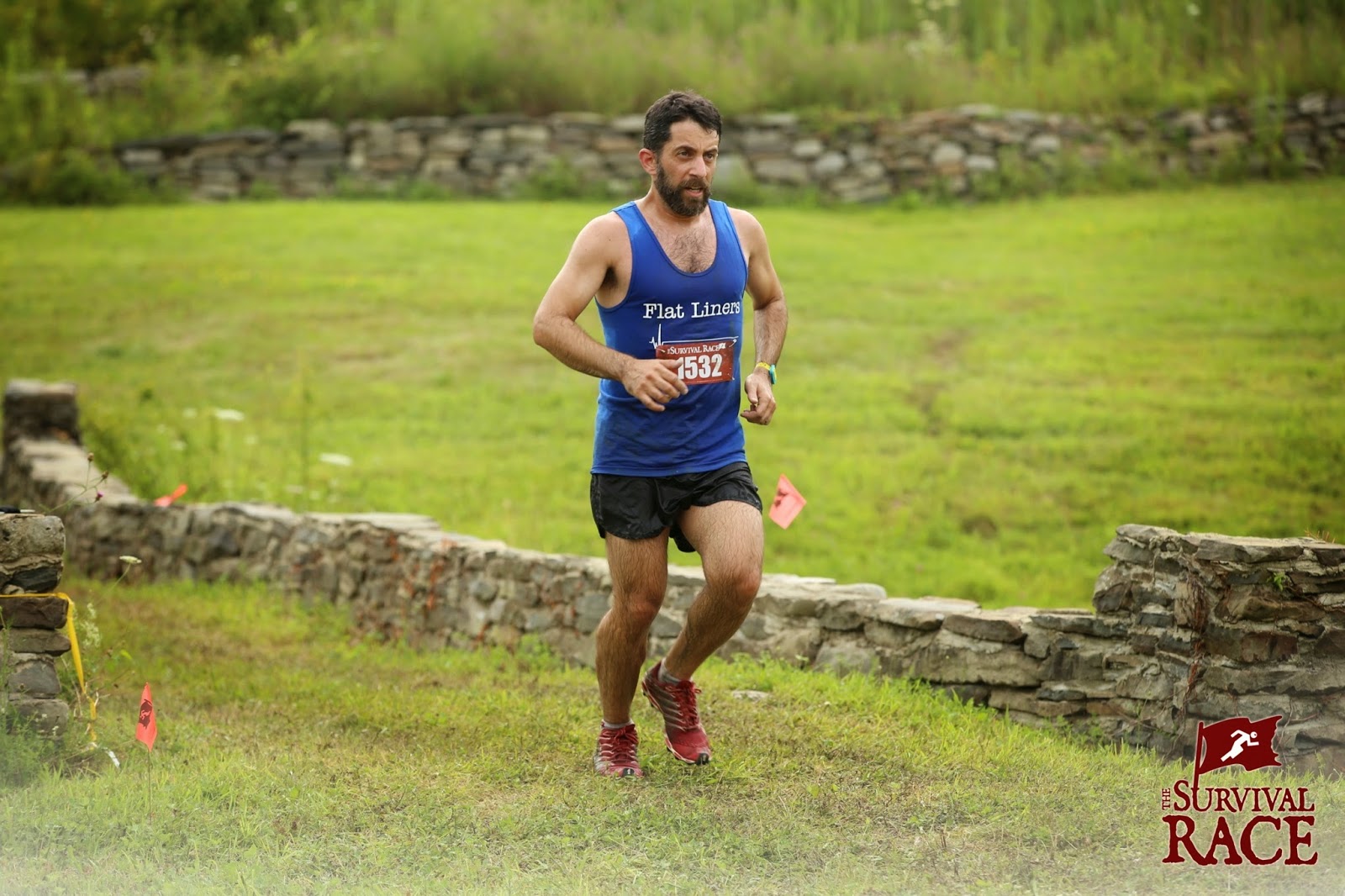 Obstacle course races are pretty stupid.  They are ridiculously contrived, and they are all pretty much the same, and for every 500-person wave they send off every thirty minutes, there are probably three people that can actually run.  But, if you're going to do one every two or three years, I guess they're pretty fun.  The Survival Race obstacles were fairly similar to those I was familiar with from Warrior Dash, with a couple of difficult exceptions--a rope climb, a tire carry, a couple of tougher walls.  The water crossings were disgusting and the mud pit was VERY disgusting and I probably should be on antibiotics afterwards.  But even in my half-fit state I was able to overtake all of the fast starters within the first mile and win the first wave, which stood up to win the day:

UPDATE: So, my aforementioned lab work?  Lyme disease.  I'm about a week into the antibiotics and feeling significantly better, so maybe the fall racing season won't be a total wash after all. 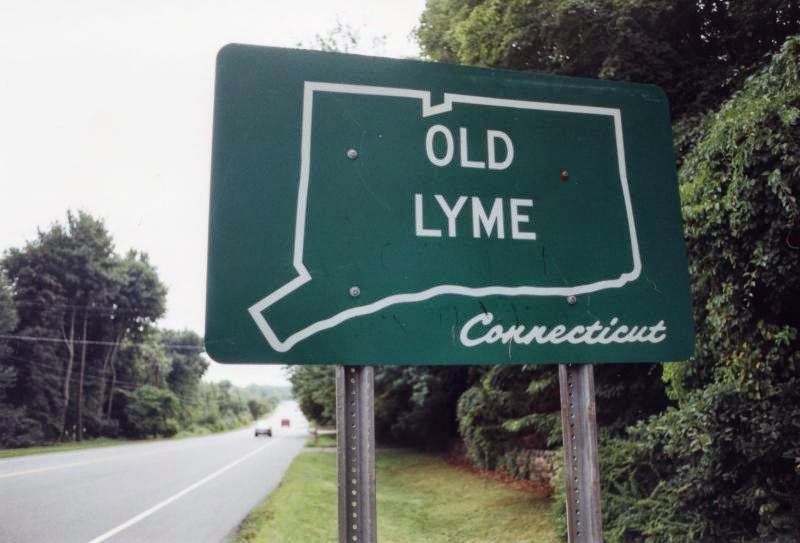