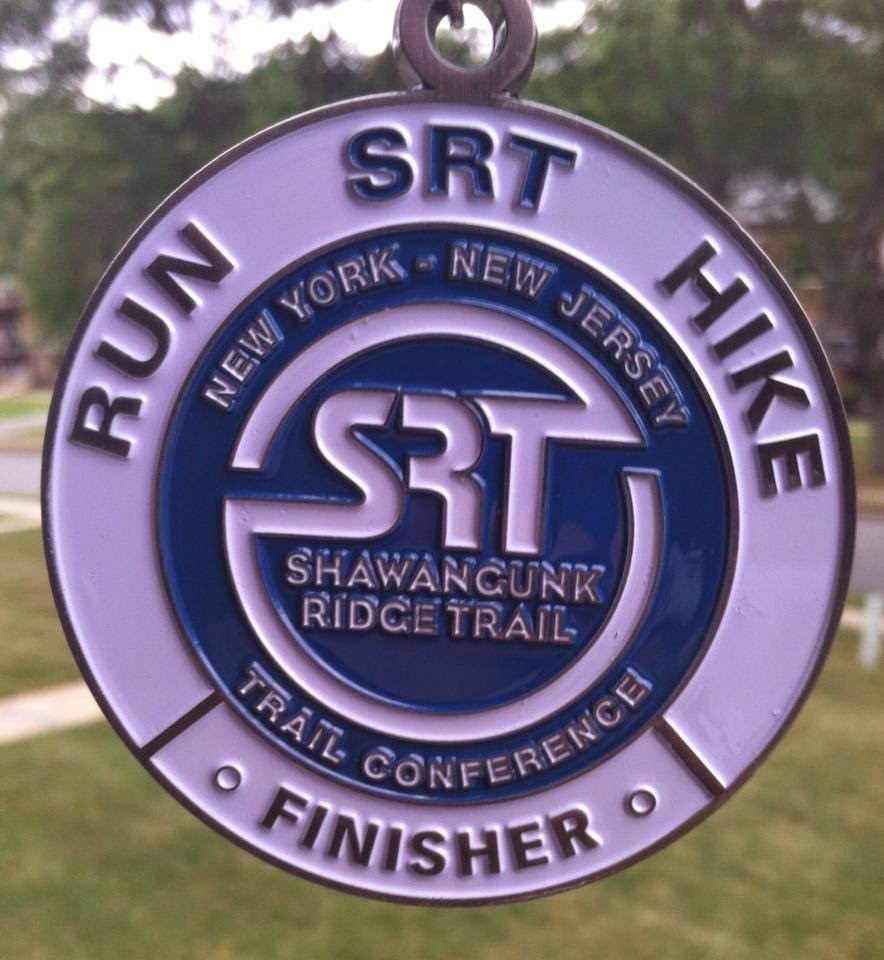 I'm not sure at what point I realized it--maybe at the start, maybe five miles in, maybe after four hours--but at some point last Saturday, it dawned on me that running a technical ultra at the end of the highest-mileage week I've had in over a year was maybe not the smartest idea I've ever had.

I knew going in the that inaugural Shawangunk Ridge Trail Run would be a tough day.    Race organizers Ken Posner and Todd Jennings love their technical trails, and looking at the course map beforehand, it was clear that the race would encompass some of the most technical trails the area has to offer.  I love running point-to-point courses, though, and as the race was vaguely following the course of the Wagathon, one of my favorite fat-ass events, I figured I'd give it a try.  Plus, I liked the idea of a self-supported "adventure."  The date was pretty good as well, falling three weeks before my main focus for the fall, the Tesla Hertz Run, so I went in to the race looking for a good, long, hard effort.

As mentioned, the preceding week was the longest one I've had in some time.  I ran a nice long cool down following the Whiteface Uphill Race the week before, getting in about 17 miles for the day, and wound up getting in 16 on Sunday.  Monday was my friend Brian's 42nd birthday; in celebration, he decided he wanted to run 42 miles over two days, so we ran 21 miles both Monday and Tuesday.  Thursday I met up with tri-geek Mark Eisenhandler and inov-8 stud Laura Kline (who would win the SRT 20 mile division) for a track workout; while it went quite well, it was certainly the toughest workout I'd done in months.  Needless to say standing on the starting line in Sam's Point two days later I wasn't quite feeling my freshest.


The Shawangunk Ridge Trail is not a new trail per se, but is a new blaze by the NY-NJ Trail Conference that links up a series of pre-existing trails that, all together, run the length of the Shawangunk Ridge, from High Point, NJ, to Rosendale, NY, a distance of 74 miles.  Ken, the first person to run the entirety of the SRT, organized three divisions: a 74-miler over the full length of the trail; a 32-miler from Sam's Point Preserve to the finish; and a 20-miler, that started in Minnewaska State Park.  Only five intrepid souls took on the full beast this year (and only one finished), but the 50K+ had about 30 starters, and the 20 miler almost fifty.

As I mentioned, the course generally mimics that of the Wagathon, a local fat-ass which will see its tenth running this November.  In fact, the first five miles, from Sam's Point to Lake Awosting in Minnewaska SP, are identical.  After an uphill opening mile on an old carriage road, the course turns into a rocky, difficult single track for the next two miles to Verderkill Falls, then two more somewhat technical miles on an exposed rock ridge before passing Mud Pond and entering Minnewaska.  Generally, in the Wag, I will tolerate these opening miles, looking forward to reaching Awosting and running a majority of carriage trails the rest of the way.  The SRT, however, sticks almost exclusively to little-used single track and ventures onto the carriage roads for brief, interrupted stretches only.  I led the opening few miles but was passed by the eventual race winner near Mud Pond, about four miles in.  I was looking forward to reaching Awosting, but upon getting there, remembered that I had to negotiate the rock scramble over Castle Point and then down the tricky descent to Rainbow Falls.  I run those trails very infrequently, and got lost two or three times, once for several minutes, needing to bushwhack back though some thick undergrowth and up a dry stream bed to get back on trail.  Each time, I'd be caught by a group of three or four runners behind, only to pull away again almost immediately.  Finally I finished this section, only to be rewarded by starting the descent down Jenny Lane, one of my least favorite trails in the Gunks.  And then, after negotiating that, things improved only slightly, as the course then took us over the High Peters Kill Trail.

I won't bore you with the details.  It was just a very long, uneventful day.  I basically ran solo for the last six hours.  I had a nice stretch from Coxing Kill to Chapel Road on Undivided Lots Trail, a nasty little bit of single track that I actually don't mind too much; and the eleven miles or so from that point were, while hilly, pretty runnable.  But, by that point I was already 4.5 hours in to the day, and the final couple hours were no picnic.  I was able to manage 7:30 pace over the final five, flat miles along the rail trail and hang on for second.  It was a long end to a long 116-mile week, but the goal was to get a long, hard day out, so I guess I succeeded.  I guess I looked pretty crappy at the end, as Jodi seemed pretty concerned for about twenty minutes.  But once I pounded a couple of Diet Cokes and some chocolate milk, I was able to settle down and enjoy my reward:

Posted by gunksrunner at 7:26 AM