It's been a little over three months since my last race at the Cayuga Trails 50 mile, and I'm just about ready to get back on the horse.  My training partner Phil, with whom I've shared many, many miles, finished just a few minutes behind me there, and returned to racing last weekend with his second straight runner-up finish at the famed SOS triathlon.  This week he sent me his CT50 race report for some reason, and as he doesn't waste anyone's time with a blog, I offered to waste some more of my readers' time by posting it here.  So, here's Phil's slightly delayed CT50 recap.  I think you'll like it.  It's kind of like a race report on acid.  Picture a drunk British guy telling you about his last race and you've got the general idea.

We arrived at the park with about 40 minutes until the start time and organized a drop bag for Buttermilk Falls with some spare bottles and nutrition in it. The weather was perfect and glowing red/pink cotton ball clouds drifted over our heads, today would be a good day to die. I lined up 4 or 5 rows back and found Jay my New Paltz running buddy. Ian said a few words and then blew the rams horn, we were off. We set off at that quick pace that almost every race starts at and we hit the first small hill, I backed off and started to think about the miles that lay ahead. Jay and I ran close to each other and chatted a bit. The trails where nice rooty, rocky and rolling, the miles passed easily. We hit the new loop which added some vert but also some fun trails. I was jumping over a few logs which was fun but I knew in 5 hours each one would be a cunning trap just waiting to send me face first into the dirt. We ran past the Old Mill aid station, no need to stop. We headed to the first river crossing, it didn't have as much water as i expected and it was actually nice to get my feet wet. Let the squelching begin!

The miles passed quickly and the trails were really nice rolling forest rooty and soft. Jay was in front of me and was running the steady smooth pace he always runs. We headed down to Underpass aid station and onto the easy single track and river crossing, I thought the crossing would be deep and was expecting it to be waist deep. Jay was ahead of me and I figured he would go in head first but it was kinda shallow so sadly no fun. We popped out the other side and cruised to the base of Lick Brook climb, I felt great on this climb, but kept a lid on it, knowing that these trails wouldn't give up a finish without a fight. We got to the top and started to roll through the forest and fields. I knew some of this course would be muddy but so far it was in great shape. Rolling along and chatting to Jay we missed a turn and ended up next to a farm and a pig pen, when I heard the banjo playing I knew we had over shot our turn. We did a 180 and ran back to find the turn we had missed. Running with Jay is like being with an able-bodied House MD, so i was probably riveted by some intense medical chat and didn't see the big red arrow telling us to enter into Mirkwood.

Into the wood we went, it was wonderful mudfest everything an East coast runner wants. Jumping rooty and muddy ground I prayed my shoes would stay on my feet. We emerged onto some grassland with the odd mud patch. At this point I felt hungry and wasn't sure why, I had been good with nutrition and fluid, it was odd but I figured my body was giving me fake news and I would go all in at Buttermilk Falls AS. We headed to Buttermilk Falls, all was good. When we hit the aid station, I took on about 450 calories and some fluids, we got in and out very quickly. The climb up Buttermilk Falls was harder than I thought it would be but I kept my legs moving, spurred on by the fact my T-shirt had turned into a weapon of mass destruction. It single-handedly contravened several international weapon and pollution treaties, but I was racing I had no time to hand it over to the appropriate authorities. The waterfall is beautiful and the trails are perfect. I saw my buddy Tim at a merge point and he was looking good, that gave me a nice boost.  We headed back through the muddy forests and fields along the rolling descent, over the way too shallow river and back to Underpass AS.  It was time to go the dark side.

“Coke please.”
“More Coke.”
“Just one more Coke.  What's the worst that could happen?” (I have Youtube, I know the worst that can happen, especially if you're a tooth, a coin or a Mento!)

Fully loaded on sugar and chemicals, I set off again hanging just behind Jay. I took a fall but the ground was soft and I was fine. I felt it was a bit early to be falling.  The trails are good, the Coke is working, I felt great. We hit that big flight of stairs and I felt a bit weak but not too bad. The descent felt good and we headed along the trails to the river crossing and back to Old Mill AS. I got some Coke and ginger ale, the more sugar the merrier! We set off for the turnaround, some easy trails, some rocks some roots but it was fun, until I had another fall, this was a type 3 trail running fall, you don't see it coming, all you know is you're on the ground and you're cut and you hurt but nothing was broken or twisted (well, no physical part of me), I got up and felt ok but not great, I felt a bit sick. We ran into the turn around and I grabbed a few things, forgot a few things and lingered deciding if I should run back to my drop bag. I felt quite sick and weak at this point, so I figured I would just get back to running.
Loop 2

Jay was gone. I wasn't feeling great, I was sure I would be sick. It wasn't an exciting prospect. I also felt weak/dizzy running through the new loop near Old Mill. I knew that if I kept going it would pass. I got to the Old Mill AS and had some more Coke and ginger ale. Shuffling on the easier trails felt ok but I wanted to walk now. The internal battle was raging, "Just walk you'll feel better"; "Why walk on the flat or downhill that's silly;” “ A 15 min mile is better than a 20min mile;” “I'll run flat and downhill and walk ANY hills- that's the deal otherwise all the beer will be gone when you finish- lets go”...so on I went feeling kinda sick but pushing as best as I could and sticking to the deal my mind had made with my body. 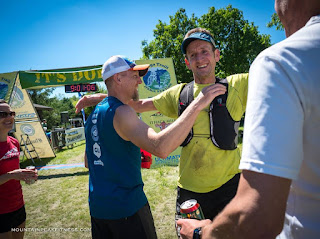 I crossed the river and wanted to sit in the water for a bit. I didn't, I pushed on. Up and down a few hills, I got a bit lost, I turned back and went down a hill I had just walked up, I saw a runner coming towards me and they confirmed I was on the right trail. All good, back to the struggle. The miles passed more quickly than I thought they would. I got to the Underpass AS and gorged on that sweet dark nectar! Off I went over the tracks and through the river. I got to the Lick Brook climb and I was slow but just as slow as the other runners already on it. I was starting to feel better, I was going to finish strong. I found extra strength knowing that I had passed that epic low and what lay ahead would be better. I was starting to overtake people and getting stronger. I felt strong running through the muddy field and forest, jumping roots and dancing around shoe stealing mud pits. Stairs, rocks, roots it was all passing by me now, I had sub 15 miles to go. The T-shirt was excited too, it often reminded me, it had gone from awful to suggesting that it was a close relation to a long lost ancestor who was responsible for the London plague and the rats where purely minions in a grand scheme. I thought about ditching the T-shirt but it wouldn't have been fair to leave it at at aid station that didn't have a hazmat team on standby. I would have to finish with it.

I got to Buttermilk Falls AS. Coke, Ginger ale and watermelon. I was homeward bound, I was strong, climbing the falls felt good but I wanted to get into the cool waters. On I pressed running flats, downhills and small hills, i was overtaking people. I was going to enjoy the last 10 miles. It was nice to get encouragement from other runners and people out for a hike, it really helped. Coke and Ginger ale at every aid station, I got to Old Mill and was told 5k to the finish, time to give it my all. I got just passed the AS to the stone bridge and the volunteer said 2.6 miles to the finish, heck yeah I eat 2.6 miles for breakfast. The miles passed quickly. I overtook the lead woman and she said “you go girl” and then said “Oh sorry you're not a girl!” I wanted to say something witty/encouraging as a response but I had nothing. I got on the downhill back to the finish and felt great, took the left and ran to the finish. I had so much energy I sprinted to the line to finish a shade over 9hrs. I was happy and Jay told me I was 16th! That was better than 2016 and I knew that lots of beer was left! I got to eat and drink beer with some awesome trail people.

Summary
16th place, 9hrs 13 seconds (my time was slower than 2016 but the course was longer and had more gain)
1st AG 45-49
The new course was amazing, it had everything.

What did I learn  the advice i got from an ultra runner a while back was so true on this day. “You're going to get lows, everyone gets lows, you have to believe they will pass because they will.”

Thanks Ian and your volunteers you put on an amazing race!