An Unsolicited Rant Regarding a Few Ounces of Beer 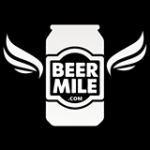 (Editor's note: this may be the first in a series of rants coming in the next few weeks.  I have a few things that I feel like I need to get off my chest that might make it out in blog form.  Sorry in advance.)

I ran my first beer mile of 2015 a few weeks ago at what we're I guess calling the second annual Hudson Valley Beer Mile.  I mentioned the inaugural race very briefly last year; I ran the penalty lap (as I almost always do) and finished last in a four-person field in an embarrassing 16:31.  Clearly I am a much better pizza racer than beer miler.  But something clicked for me this year.  I don't know if it's the low carb diet, the fact that I went in on a semi-full stomach, or the fact that I hadn't had a beer for several weeks prior, but I felt much, much better than I normally do during these shenanigans.  We had a solid field of eleven runners.  Dr. Mike went out hard defending his title from the previous year, but BM virgin Oestrike was right on his heels; the two would reprise the back-and-forth battle they had at the pizza race six months earlier.  I felt like I drank the first one pretty quickly for me but was in tenth place starting the first quarter.  I moved up throughout, though, spending most of the race in the mid-pack before eventually working my way up to a chunder-free third place finish in a huge PR of 8:16.  No, I'm not a good beer miler, but at least I'm no longer embarrassingly bad.

The reason I bring this up, though, is because in case you haven't noticed, the beer mile has suddenly become very trendy.  It seems like it's not just college track runners and assorted idiots doing it anymore.  James Nielsen's May 2014 world record of 4:57--the first sub-5:00 beer mile in history--was a watershed moment for the sport, which suddenly gained mainstream notice for the first time.  Much like Bannister's famed 1954 run at Iffley Road (almost 60 years to the day before Nielsen's barrier-breaker), once the world saw what was possible, a bevy of athletes charged through what was thought to be an impenetrable barrier.  By the end of 2014 we had a sanctioned world championship, complete with sponsors and on-line streaming video coverage.

The record has been lowered four times in the last 18 months, most recently two weeks ago by Canadian Lewis Kent, which I'm going to use as a jumping-off point for the discussion I want to have about legitimacy and perception.


OK, first things first: I have no doubt Lewis Kent ran a 4:51 beer mile.  I'm not accusing anyone of cheating, fabrication, or anything like that.  The record has been ratified and I have no problem with that whatsoever.  That is not the point I'm trying to make in any way, shape, or form, so let's make that clear.

I was struck when watching the video, however, that neither Kent nor Phil Parrot-Migas, who ran an impressive 5:07, emptied their beers prior to starting their laps.  Beer mile tradition holds that a competitor overturn their empty can or bottle over their head, to demonstrate that the vessel is indeed empty, before leaving the drinking zone.  Now, that isn't an official "rule".  Beermile.com, which bills itself as "the official beer mile resource" and is generally responsible for ratifying performances and codifying the rules, states: "It is strongly recommended, when attempting official records, to tip the empty beer can or bottle over your head at the end of a chug to verify an empty vessel." (italics mine) But it is certainly traditional, and I was surprised that in a well-publicized record attempt, neither of them would adhere to that tradition.  (Plus, it makes for an appealing visual, and hearkens back to the sports' underground roots.)  James Nielsen does it in his video:

So maybe it's not required, but it certainly helps, and again, while I have no doubt that the record was legitimate, it seemed unlikely to me that it would get ratified, and I said as much:

Jason Friedman I don't understand. Turning your empties over to demonstrate they are empty is one of the most basic rules of beer miling. It is not hard to remember to do. Neither of these guys did it once. No way this gets ratified.

Jason Friedman The legal amount left over is zero. The beer has to be finished. Pour it over your head like everyone else in the world.


However, it did get ratified, and someone threw out an explanation on the URP Daily News:


Chris says:
November 18, 2015 at 6:18 am
beermile.com/rules only says that inverting the vessel over your cranium is “strongly recommended”
As the speed of chugging has increased, so too has the amount of foam left in the bottles, which wouldn’t come out. True record attempts now get a second person involved who pour any remaining foam / settled liquid into glasses, to see how much was left. I think a de facto rule has come into effect that basically says that the total amount of foam left in the bottles or cans cannot exceed 3 oz.
So here we arrive at the crux of the issue.  To me there are almost too many issues with the statement to count.  "As the speed of chugging has increased, so too has the amount of foam left in the bottles, which wouldn't come out"?  What this boils down to is: if you drink your beer fast enough, you don't have to drink all of it.  How is this acceptable?  The beer mile is a test of drinking quickly and running quickly, and most importantly of balancing the two.  You're drinking so fast that you can't get all the foam out?  I have a solution for you: drink slower.
If someone claimed they were drinking so fast they couldn't get it all into their mouth in time, so a little bit of beer spilled onto their shirts, but if they wrung out their shirts and it was less than three ounces then that was OK, they'd be laughed at.  How is this different?
"...a de facto rule has come into effect that basically says the total amount of foam left over in the bottles or cans cannot exceed 3 oz."  No.  No good.  You cannot have a sport where world records are being attempted, recorded, and ratified, that invokes "a de facto rule" that does not appear on the website of what is the sport's "de facto" governing body.  There are a clear list of rules on the website.  Follow them.
If beer mile.com wants to adopt a "3 oz of foam" rule, go ahead.  But they do so at their peril.  As much as the Beer Mile is an underground event, there is clearly a non-negligible element of the sport that is striving for legitimacy and recognition.  Later this week Flotrack will host the second Beer Mile World Championships in Austin, TX.  This is an event that attracts sponsors and money.  Both Flotrack and beermile.com sell beer mile-related gear on their websites.  Lewis Kent just signed an endorsement deal with Brooks.  Don't think this has garnered any widespread recognition?  That last link--with an accompanying three-minute video--is from ESPN.com.
My point is that the beer mile is having a moment in terms of mainstream appeal that distance running rarely achieves, and that this is a very tenuous thing.  Many non-runners, and runners who are non-beer milers, are drawn to the event because of its absurdity but also because of its simplicity.  Four beers, four laps.  If you start placing qualifiers and exceptions onto that simplicity, it will not be long before the mainstream public loses patience.  "You have to drink four beers, but you can leave a little at the bottom of each one"?  The public will see that for what it is: a cop-out.  (As an aside, it's not an insignificant amount.  Three ounces is about 6% of the total volume of 48 oz. in a beer mile.)
By all means, if people want to pursue the mainstreaming of the beer mile, with all the attendant publicity and money that implies, please do so.  It's fun!  But be careful when you start to play fast and loose with the rules.  To the public, the fact that we have rules is the funniest part.  Without that, you've got nothing.
Posted by gunksrunner at 11:20 AM 3 comments:

Email ThisBlogThis!Share to TwitterShare to FacebookShare to Pinterest
Labels: beer, Running
Newer Posts Older Posts Home
Subscribe to: Posts (Atom)
"All I want to do is drink beer and train like an animal."
--Rod Dixon