Ridge Rockin' with the Depot 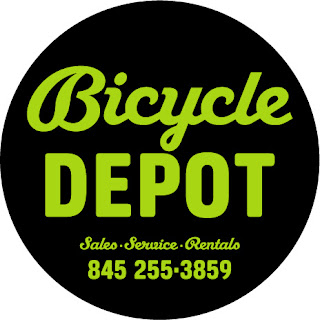 Last month I posted about Rock the Ridge, a new 50-mile race/hike that's being held for the first time this year to commemorate the fiftieth anniversary of the Mohonk Preserve here in New Paltz.  I didn't say anything about running the race at that time. I've been planning since last fall on running the Ice Age 50K in Madison this month, a race I've wanted to do for quite some time, and with RTR falling just one week before Ice Age, it didn't seem doable for me.  Also, though I support the Preserve and their fundraising efforts, I wasn't too keen on going around, hat in hand, in order to raise the $250 in pledges necessary to compete.  But as the race approached I got more and more enamored of the idea of running an ultra right in my own backyard, on the trails I train on every day.  I don't know exactly what happened, but all of a sudden one day I decided I HAD to run RTR.  So I asked my friends Geoff and Mike, the co-owners of the Bicycle Depot, if the shop would be interested in sponsoring me for the race, and they graciously agreed.  So, my first sponsorship for 2013: the Bicycle Depot!

The Depot is one of several excellent bike shops in our area, and in my opinion is the best one.  They offer a wide range of road and mountain bikes, accessories, and apparel.  They have a full-service shop for assembly, repair, tune-ups, you name it.  They have a full fleet of rental bikes that they re-stock every year, so they remain in great condition.  And, they are just about the friendliest group of bike mechanics and business owners you could ever imagine.

Mike and Geoff are strong supporters of the local racing scene as well as the local community in general.  In addition to being one of the main sponsors of the Spring Dual Against Cystic Fibrosis, they are longtime supporters of the ridge, the Preserve, and the Mountain House.  They've donated brand new bikes as raffle prizes for local events like "No Petrol Day" and the New Paltz Regatta, and they've formed partnerships with other excellent local businesses like Rock and Snow (another huge ally of the Preserve and one of the main sponsors of RTR) and the Mudd Puddle Cafe to help support our unique community.  I'm proud to represent the Bicycle Depot and hope that I can put in a good showing this weekend.  In terms of the race, Ben Nephew is the overwhelming favorite, but hopefully he'll take it easy on me and we can run together for awhile, at which point, I don't know, maybe he'll get eaten by a wildebeest or something.
Posted by gunksrunner at 1:20 AM

Email ThisBlogThis!Share to TwitterShare to FacebookShare to Pinterest
Labels: Bicycle Depot, Rock the Ridge, sponsor
Newer Post Older Post Home
"All I want to do is drink beer and train like an animal."
--Rod Dixon