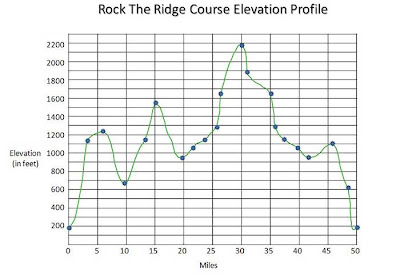 One of the nice things about racing ultras is that there are always lessons to be learned. The races are so long, so many things can happen, and whether you have a good day, or a bad day, or more likely, a combination of the two, you're sure to come away with one or two nuggets that will help for the next time.
The Rock the Ridge 50 mile last weekend was no exception.  This race was not in my plans at the beginning of the year, but ultimately the allure of running a 50 miler on my home trails was too tempting, and I bailed on the Ice Age 50K for a chance to race the beautiful carriage roads of the Shawangunk Mountains.  As with any inaugural event, you're never quite sure what to expect, but race director Todd Jennings did an excellent job partnering with the Mohonk Preserve to put together a nice, smoothly-run race.

I knew going in that I'd be running for second place, with my good friend Ben Nephew, one of the country's top trail runners, slated to compete.  Ben had a good week, as just a few days before RTR he was named to the US team that will compete at the IAU Trail World Championships in Wales in July.  (He'll join a stacked team, with Brian Rusiecki, Jason Bryant, Dave James, Justin Ricks, and Dave Riddle, that should be one of the favorites for team gold.)  Ben and I spoke a few days before the race and made a plan to run together for the first half, hoping to average 7:45 pace or so on the flat segments, maybe a little slower on the climbs.  I knew this would be an easy pace for Ben, but figured it would help me to settle into a not-too-slow tempo in shooting for my goal of 6:40 (8:00/mile pace).  The forecast was promising: cool at the start, clear, with expected highs in the low 60s.
﻿ ﻿
After the opening jaunt across the fields from the Testimonial Gatehouse, we started the climb up Lenape Lane, a 3.5-mile dirt road that climbs about 1000' at a steady 4% or so.  This is one of my staple training stretches, particularly in the winter, when the trails are covered in snow and we basically run up and down Lenape until the thaw.  I know every step of the climb and was happy to settle into a nice, steady tempo with Ben as we chatted about recent races and his prospects for worlds.  About a mile from the top, we gave up the lead to eventual second-place finisher Dylan Armajani, who pushed through the top of the climb with about a 5-10 second gap on us.  We crested the hill, and the 4-mile mark, at just over 31:00, right on 7:45 pace, but for the uphill!  I felt fine, but was wary of going any quicker this early.  I could tell that Ben was itching to chase after Dylan, though, and let him go just past the top, as we entered the Mohonk golf course.

And that was basically the last I saw of either of them.  I quickly eased off the gas, passing 5 miles in 38:10, and fell into a back-and-forth battle with CPTC's Jeff Holy, which we would continue most of the day, as I easily put time into him on the long climbs and gave it right back on the downhills.  I settled into a nice solo rhythm, running right on 7:50-8:00 pace, passing 15 miles at Smiley Tower in 1:59:59, and 20 miles, on Overcliff, in 2:38.  By the time I reached the second aid station, Lyons Road, just shy of 24 miles, I was starting to feel the heat of the day, but was still feeling pretty strong.

The next six miles were a slog, gaining over 1000', including the brutal 3/4-mile, 400' climb from Awosting Falls to Lake Minnewaska.  I struggled badly, falling off to about 10-minute pace on the exposed section as the heat and elevation started to sap my strength, but rallied back to 8:30 pace coming back down and was able to come through Lyons Road on the return trip, 38 miles in, at 5:15. I knew 6:40 was out of reach, but with the last 12 miles being almost exclusively flat and downhill, thought I had a pretty good chance at breaking seven hours.

The next seven miles ranked among the worst of my life.  No real pain--my quads, which were my main concern other than my balky hamstring, held up really well.  Just overwhelming fatigue.  I tried pushing the nutrition, but to no avail, and by 42 miles was alternating walking and running, as relay runners streamed past in a quick procession.  It took my 91 minutes to get from Lyons Road to the 45 mile mark on Forest Drive--13:00 pace for seven miles.

And then, suddenly, as I turned downhill towards the finish, my legs came back. (Actually, they started coming back about a mile or two before that, when I was able to get back into a slow but steady rhythm of probably 9:00 pace along the flat section of Oakwood Drive.)  I certainly wasn't fast on the downhills, but the quads felt OK, and I was able to cover the last 5.5 miles in 41 minutes--close to my original 7:45 pace, and sneaking in just under 7:30, for a fourth-place finish and a two-minute PR.

I'm taking two main lessons away from this race.  One has to do with nutrition.  I learn more and more about my in-race fueling with every ultra I do, and I'm certainly getting closer.  I basically used GU and S! caps the whole way, drinking Gatorade, Coke, and a little bit of Nuun.  For the most part, it worked pretty well.  My salt intake is definitely my most limiting factor.  I carried 21 S! caps for the race, joking beforehand with Ben that if I needed more than that, something had gone horribly wrong.  Well, I used every one of them and probably would have been happy with 5 or 10 more.  Three capsules an hour should be plenty, but I think my personal requirements may be a little higher, particularly on a warm day where temperatures got up into the low-to-mid 70s. Every time I was able to pop a couple of tablets, though, I felt better almost immediately, so future efforts will focus on more regular salt consumption, and maybe switching to a higher-salt drink, such as Perpetuum, rather than Gatorade.

The other lesson is, I'm just not in shape for a full 50-mile effort right now, and I can't fake my way through it either.  I have an excellent fitness level for 50K and feel like I could run a really good one (which bodes well for GCI in July), and I can stretch that fitness out to 35-40 miles at sub-maximal effort.  But I don't have the mileage, particularly the long runs, to hold up hammering a full 50 miles just yet.  So, in the four weeks I have left before Cayuga Trails, I'm focusing on getting three solid weeks of mileage with at least two back-to-back long runs in there.  If I can average 90 miles/week with a couple of real long ones, I'm hoping to be ready to mix it up in Ithaca.  With the field they're expecting, I'll be lucky to sneak into the top-20, but it should be a ton of fun.

Thanks again to the Bicycle Depot for sponsoring me by covering my fundraising commitment to support the Preserve, allowing me to run.  And thanks to Todd, Ken, Norman, and everyone at the Preserve for putting on a very nice event.  For a $150 entry fee, I think we could have expected more than three full aid stations, but in all other aspects, you guys did a hell of a job.
Posted by gunksrunner at 1:30 AM

Email ThisBlogThis!Share to TwitterShare to FacebookShare to Pinterest
Labels: Race Report, Rock the Ridge, Running
Newer Post Older Post Home
"All I want to do is drink beer and train like an animal."
--Rod Dixon