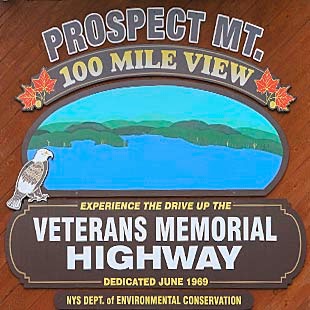 I've been trying to get to Lake George for the Prospect Mountain hill climb for the past few years.  I like hill races, even those on pavement, and this one, less than two hours from my house, has been on my radar for some time.  The race has a long tradition; this year marked the twenty-sixth running, and several top-flight competitors have taken on the climb, most notably New England mountain running legend Tim Van Orden.  I didn't know who would be in the field this year, though I wasn't sure it would matter.  The race fell at the end of week of five of my final six-week push before Cayuga Trails; with 550 miles run in the previous 5 weeks, I doubted I'd be able to put up much of a placing if anyone of note showed up.  I was looking forward to racing, though; with only a pizza race to my name since Mount Mitchell, I was getting a little antsy.  And I've been feeling good, running some decent-to-solid workouts on both the track and the roads to go along with my 110-mile weeks.  I wasn't fresh, but I was fit; maybe I could sneak out some kind of result if the day went well.


This seemed unlikely as I finished my warmup and saw Mike Slinskey getting out of his car.  Mike is a bit of a local legend in our parts.  A three-time Olympic Trials qualifier in the marathon, Mike holds many of the course records for local races in the Hudson Valley, and is an accomplished (if less prolific) mountain racer as well, having placed highly at Whiteface and Mount Washington in the past.  At 45, he's not quite the indomitable force he once was, but he remains a tough competitor, still one I've never beaten in a race.  His presence alone meant I was probably not in the mix for the win.  Oh well.


I felt a bit sluggish overall on the warmup--likely the result of my 5am alarm--and my stomach didn't feel great, but as far as I could tell my legs felt strong enough.  No tightness in my Achilles, which has been bothering me to varying degrees for several months, and no real residual soreness from the hard track workout two days previously, or the 119 miles of the previous seven days.  Not raring to go, exactly, but as best as I could hope for as we stood on the line.  There were a few other fit-looking folks lined up near the front, so we'd have to see how everything played out.


The Veterans' Memorial Highway that runs from Lake George to the summit of Prospect Mountain is just under 5.7 miles, climbing 1600 feet in elevation.  If everything went well, I thought I might be able to run near seven-minute pace, close to the 40-minute mark which, based on previous years, would put me in the mix for the top two or three.  The first mile is mostly flat, and I started fairly aggressively, following a fit-looking runner about my height to the lead immediately after the gun.  I checked my watch after a couple minutes of hard work and saw that my GPS had me running 5:55 pace--probably not sustainable.  I backed off a tad to a slightly more relaxed tempo and allowed a small gap to open; I came through the first mile in 6:05, five seconds back of the lead, not sensing anyone from behind.


The climbing started in earnest immediately after the mile mark, and the pace slowed considerably as we started uphill at a 6-8% grade.  My cadence seemed a little quicker than the leader's, and I caught him within about half a mile, moving in front and opening a small gap.  I couldn't completely put him away, but it was still early; I resolved to keep the pressure on as best I could.


After a steady mile and a half of climbing, the road leveled off near the 2.5-mile mark, and he came back up on my shoulder.  I picked up the pace in response, and we dipped down under 6-minute pace as I started to open the gap again.  I was feeling strong, though I knew I was probably going too hard.  I passed three miles in 20:17, about five seconds in front, as the climbing started again.


From that point on there would be no respite from the climb, but we were already past halfway and there was no looking back now.  I started to pay the price a bit for my aggressive start.  My legs got heavy and my cadence slowed a bit.  I could feel the rubber band stretching between me and my rival behind me, but I couldn't get it to break; I could still sense and hear him back there from time to time, and at four miles (27:53) the gap was still only around five seconds.  Keep pushing, keep pushing.


The fifth mile became a slog.  The tempo dropped drastically, and I fought to keep my pace under 8:00/mile.  Slowly I could hear him coming back on me, and inevitably the negative self-talk crept in.  You can't do it, you can't shake him.  You'll be lucky to hold on to second.  I could hear him drawing closer, very slowly, with each step.


Stop it, I told myself.  If you can get to the five-mile mark with the lead you've got a chance.  I had very little left in the legs, but we were only about a mile from the finish.  Make him work for it.  See what he's got left.  With about two hundred meters until the five-mile marker, I could feel him right behind, and I knew I was going to get caught; I eased off the pace the tiniest bit, regrouping, gathering myself for one more move in the final half-mile.  Just relax.  Recover a little bit.  Maybe he's through, maybe you can come back on him at the end.


Sure enough, as he caught me, I felt him relax a tiny bit, content to latch onto my shoulder and not pass me and force the pace.  An opening, maybe.  I took a deep breath and kicked the pace down a notch, getting immediate separation.  Two strides, three, four.  Past the five mile mark, a three second gap.  Two hundred meters later I could feel the gap getting even bigger.  I was locking up, but there was less than half a mile to go, and it felt like I had finally put him away.  Around a big sweeping left turn with two hundred meters to go, I felt and heard nothing.  I chanced the tiniest glance over my shoulder and saw nobody.  Don't let up, I told myself.  You can't have more than a few seconds' lead.  Keep pushing.  Finish line in sight now.  The bored, tepid applause of scattered spectators.  Keep pushing, come on.  A hundred yards.  Fifty.  OK, nobody's there.  Nobody's cheering.  I eased up five yards from the line and, of course, out of nowhere, got blasted from behind by a tall gangly runner in an orange singlet whom I hadn't seen since the start.  No!  Too late, no time to react.  Half a second and it was over.


I slumped to the curb at the end of the finish chute, kicking myself. After leading from the nine-minute mark on I lost the race in the final stride.  I was angry with the spectators and the finish line officials--no heads-up?  No warning?  Not a single "hey, he's closing on you" or even a blip of excitement at the prospect of a sprint finish?--but of course I was mostly angry with myself.  Even three days later I'm still kicking myself.  Sure, it was a good effort, a good training stimulus, a solid run at the end of a huge mileage block, a nice result for a race I hadn't been aiming toward at all.  But still.  Two more hard strides would have done it.


The disappointment does not wash away easily, even for an otherwise well-executed "C" race.  I guess when I stop being disappointed about being pipped on the the line, I'll know it's time to hang up the racing flats; the fact that it still rankles me so much is probably a good sign.  And again, I'll take mostly positives away from the rest of the race.  For one thing, I beat Mike Slinskey for the first time in my life, so that's something.  In terms of my overall fitness level and my response to the heavy training, I feel like I'm right on track for Cayuga in three weeks' time.  And it's silly to pretend that anything's wrong or that I'm not race ready when, if I had run one second faster, I'd feel completely confident and pleased.  But it's hard not to let the teeniest bit of self-doubt creep in.  It feels like I bought a new car which I love but a week after I bought it it's got a big ding in the side panel.  The car runs great and maybe nobody even notices there's a dent and the paint's a little scratched.  But I still know it's there.


Of note, this was the first race I've run in the Salming Race flat, so check back in a few days for my review of the shoes.