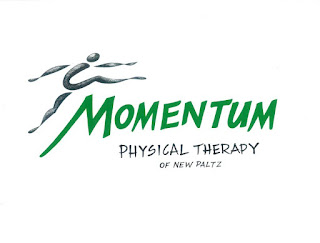 I'm very happy to announce a new sponsorship of sorts; hopefully more of a partnership really.  I've been working off and on over the past few months with Dr. Greg Cecere at Momentum Physical Therapy in New Paltz, and we've decided to make him an official part of the Gunksrunner family.

A New Paltz native, Greg studied at the University of Delaware and then worked closely in New York alongside Chris Johnson, a well-known PT among runners in the city.  He opened Momentum, his private practice, upon returning to New Paltz a few years ago and has built a loyal following in the area.  Greg is a fairly accomplished runner himself, and many of his clients are runners (including Harbert Okuti, who Greg helped to top-20 finishes at Boston and New York this year), but he sees all manner of athletes and non-athletes alike.

Greg is not your average physical therapist.  While he certainly uses modalities familiar to anyone with PT experience, much of his philosophy and treatment relies upon his extensive knowledge and understanding of the mechanisms that underlie pain and dysfunction.  Of particular importance in this respect is the role that the brain and the nervous system plays in our perception of pain.  Greg understands this better than any health professional I've ever met, and is adept at tailoring treatment and recovery plans that adhere to these principles.

In addition to sports injuries, Greg treats patients for injury prevention, stride and gait analysis, post-surgical rehab, orthopedic rehab, and chronic pain.  He even makes house calls.  Last month he fixed a very persistent "lace bite" injury that had been bothering me for over a month after North Coast in basically two sessions.  Right now we're working on a chronic Achilles issue I've been ignoring for the past couple of years.  True to form, Greg is working on the neurologic pathways that govern feedback and pain responses, using noxious stimuli and movement retraining.

One aspect of treatment I'm eager to explore more with Greg is a pre-race routine that we tried prior to Cayuga Trails this spring.  I was in great shape and ready for a huge day, and Greg proposed a treatment that he thought might help spur me to reach my full potential on that day.  Unfortunately, I came down with Lyme disease (again!) the week before the race, so we never really got to see how that worked out.  I won't say too much more about it right now, but we're going to try again with some upcoming races in January/February, and I'll go into some more detail then.

Greg is a great guy and is completely dedicated to his patients.  I'm very excited to explore avenues by which we can advance this partnership moving forward.  In the coming weeks and months, I'll hopefully feature some of Greg's writing on this site, as well as some videos.  As I get up and running with my sports cardiology/exercise physiology career (more on that later as well, stay tuned), I'll be partnering with Greg to offer comprehensive coaching and sports medicine services, including PT, stride/gait analysis, and injury prevention and recovery.
Posted by gunksrunner at 9:05 PM