As part of the buildup for Rocky Raccoon, I recently ran two local, low-key races within a seven-day span.  Not that I particularly needed to race, per se, but both are fun events that I've enjoyed running in the past, and would provide two different training stimuli that I wanted heading into the final training push.  The training has actually been going quite well--averaging over 100 mi/wk for the past couple of months, including recovery weeks, with some good hill sessions, some longish marathon-paced running, and a couple of good long runs (particularly a 40-miler with Phil and Laura that despite the arctic conditions went quite well).  I've had a few little aches and pains, but with help from Greg and Scott I've been staying (mostly) on top of things.


First up in this little racing mini-block was the Viking Run, a very low-key 10K in Rosendale, about 10 miles from my house.  This race has been going on for much longer than I know; when I moved to the area in 2004, it was already a staple of the local scene.  It's generally held on the weekend before Christmas and New Year's; the 2016 edition took place on New Year's Eve.  We're often out of town during this vacation week, but I like to run this race if I'm around; this was my fourth or fifth time running it, but the first since 2014.  Generally, I can run up front if no fast young guys show up, which was the case this year.  I showed up after an overnight shift at the tail end of a 100-mile week, hoping to break 40 minutes, which on this course, which features over 1000 feet of climbing, is actually a pretty good effort. 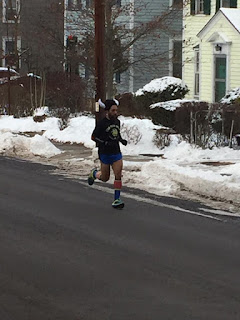 I started off at the front and immediately opened up a small gap of about 10-15 seconds during the first mostly flat mile.  Tim Kosteczko, a local runner who's been putting in some good training recently, was hanging tough in the early going, but I was pretty sure that once the climbing started I'd be able to pull away.  We hit the first hill just past the mile mark and proceeded to climb for the next 10+ minutes; by the time I reached the top I couldn't see Tim behind me.  The course then drops precipitously for about a mile, turns around, and retraces its way back to the start.  I had a two-minute lead at the turn and knew I was pretty safe in terms of the win, but continued trying to push myself for the sub-40.  The return climb is absolutely brutal, and I struggled near the top, but was able to recover quickly on the way back down and hold on for a 38:55 and a three-minute victory margin.  This year, for the first time, local running nut Chris Regan had awards made for the race, and I wound up taking home a pretty cool viking horn trophy, out of which I imbibed a few that evening.

One week later, finishing a 120-mile training week, I returned for the fourth time to the Recover From the Holidays 50K, another low-key local event that I love to use as a workout/tuneup if I'm running a big race in the middle of the winter (which I usually am).  RFTH is a fat-ass race comprised of ten laps of a paved 5K out-and-back circuit.  This was actually the 21st running of this event, which is mostly used as a training run for local distance runners; RDs Pete Colaizzo and Charlie Sprauer will let anyone show up and run as many or as few laps as they like.  Most folks will run their 10-15 mile long run for the day and sit around the bonfire eating pizza with Pete and Charlie afterwards, but each year about 10-20 folks will battle the cold (and wind, and usually snow flurries) for the full ultra.  There are no awards, but it's free, as is the pizza, so you can't beat that price.

I'm on an odd-year-only streak with RFTH.  It's a race I've tried to do every year, but in the even years, something seems to get in the way.  (Last year it was Bandera.)  Still, I had secured wins in 2011, 2013, and 2015, and while it's certainly a casual event, 2017 marked my chance to become the first four-time winner of the race.  Among a champions' lineup that includes US national team members (Byron Lane) and American record holders (Sabrina Little), that would be a pretty cool deal.

Despite the recent heavy training volume, my legs have been feeling pretty good, and my goal was to run a relaxed but steady tempo of about 22:30/lap--right around 7:30 pace--shooting for a 3:45.  I figured my current fitness level would allow me to run that pace without too much difficulty and without sacrificing the last few weeks of my Rocky Raccoon training.  My friend and training partner Brian Hickey, who has won this race twice himself, was joining me there, but was aiming for 8:00/mile pace, so unfortunately it looked as though I'd be on my own.

We started off on a frigid 19 degree morning and I immediately opened up a small lead on Brian and the rest of the pack.  I struggled through the first lap just trying to warm up; my toes were completely numb and my teeth were chattering through the early stages.  I ran the first lap in exactly 22:30 and was already over a minute in front.  About halfway through lap two I finally felt as though I had warmed up and was able to settle into a comfortable rhythm of right around 22:00/lap.  As I clicked off the miles, everything felt rather comfortable.  I didn't quite have my climbing legs, but I was able to power through the hills, as they are relatively short, and was really able to hold a nice, quick tempo on the flats.  I passed 15K in 66:30, halfway in 1:50:15, and 30K in 2:12:35.  Starting at about lap three, I checked the port-a-potty each time past the start/finish, but couldn't catch a window when it was open; finally, after reaching 35K in 2:34:50, I stopped and waiting until it opened up.  Finishing my business, I started lap eight at 2:36:55, cruised through 40K in 2:57 and the marathon in right around 3:06.  Finishing up lap nine in 3:18:30, and still feeling very relaxed, I decided to push the final lap slightly to see if I could break 3:40.  It did take a little more effort over the final circuit, but I was able to run my fastest lap at the end and finish up in 3:39:20, my second-fastest time on the course (after a 3:32 in 2013) and ninth-fastest all time.  My final 15K was my fastest three laps of the day, covering that stretch in 63:30 (6:50 pace).  All in all, a great confidence boost heading into the final buildup to Rocky.

I'll have a couple of brief posts coming in the next couple of weeks prior to RR100, and hopefully a good writeup following it.  After that the blog may have to go quiet for a few weeks.  I'm finishing up classwork this spring while simultaneously starting a new work project and writing a scientific paper that needs to be finishes by mid-March, so things are going to get pretty hairy in there for a little while.
Posted by gunksrunner at 9:00 PM