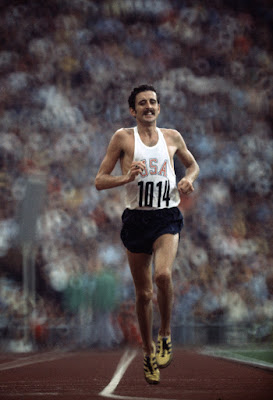 I'm currently working towards a post-graduate certification in exercise science from California University (go Vulcans!) and so I've been doing a fair bit of reading in recent weeks.  Not all of my studies have been terribly applicable to distance running, but I've been able to glean some pearls.  I've experienced a renewed appreciation of the importance of strength and core training, for example.  And while I'm becoming more comfortable with the concepts of VO2max and lactate threshold, which are the mainstays of scientific inquiry into endurance athletes and their training, I'm beginning to think that the less-discussed parameter of running economy may actually be the most important physiologic variable, particularly in the ultra world.

A quick primer, for those who may not be familiar with some of these terms.  Most athletes who have been tested in a lab will have a general sense of their VO2max and lactate threshold.  VO2max refers to the maximum uptake of oxygen by muscles that are exercising at peak intensity.  Running performance is dependent upon a wide variety of factors--the ability of the system to remove lactate, buffer excess acid, and dissipate heat, as well as various neuromuscular and biomechanical considerations--but at its most basic level, endurance performance is governed by the ability of the cardiopulmonary system to distribute oxygen to the skeletal muscles, and on the ability of the muscles to most effectively and efficiently utilize that oxygen.  These crucial components--oxygen delivery and oxygen utilization--are encompassed by the VO2max.

The lactate threshold (LT) is the exercise intensity beyond which lactate production begins to outstrip lactate clearance.  This is an important determinant of running performance, as it represents the highest intensity that can be maintained over a long period of time.  The higher the LT, the faster an athlete can run without accumulating significant amounts of lactate, which will lead to fatigue.  (This is a fairly simplified explanation, but it will serve the purposes of this rather unscientific blog post.)

OK, then, what's running economy?  Running economy (RE) refers to the muscular uptake of oxygen while running at a sustained, non-maximal pace. It is a measure of how efficient an athlete is when running at "steady-state"; one could think of RE as the VO2sub-max.  Or, compare it to a car: if VO2max is the size of the car's engine, RE is the gas mileage.

When you think of RE in this way, it becomes clear why it is such a crucial aspect of endurance performance.  While VO2max holds an important key to an athlete's potential, the runner who demonstrates better running economy will be able to perform at a higher relative percentage of her VO2max without fatiguing.  In a marathon or ultra, which takes place at intensities far below maximum effort (unless you're Zach Miller, apparently),


the ability to maintain a higher relative intensity with less effort and less fatigue is going to carry the day.  This is especially true at the upper echelons of the sport, where a relatively high VO2max is basically a requirement for entry.  Yes, there are outliers, and if you're lucky enough to be Killian (reportedly, a VO2max of 89.5 mg/kg/min, one of the highest ever recorded) or Pre (supposedly a VO2max of 85 mg/kg/min), maybe RE becomes less important.  But for the most part, an elite marathoner or ultrarunner will have a VO2max in the high 70s.  So if everyone starts in this relatively rarefied air, economy may become the determining factor in performance.

Put it this way: taken together, VO2max, LT, and RE account for 70% of inter-runner variance in performance.  If whatever contribution VO2max makes to that 70% is basically negated because all of your competitors have that same contribution, the other factors take on outsized importance.

You millennials out there on the interwebs may not know the guy in the picture to start this post.  That's Frank Shorter, winning the gold medal at the 1972 Olympic marathon in Munich.  (He was robbed of a repeat gold in 1976 by Waldemar Cierpinski, a product of the East German doping machine.)  Shorter is notable in this discussion for having a relatively pedestrian VO2max of about 70 mg/kg/min, but he compensated for this by being incredibly efficient--in fact, his RE values compared favorably with most elite East African runners, which helps explain his fantastic success despite having a "normal" VO2max.

So how do you improve your running economy?  Well...we're not 100% sure, although it certainly appears to be modifiable in some ways.  Part of the problem is that RE is determined not just by cardiovascular factors (VO2max) or metabolic factors (LT) or neuromuscular factors, but encompasses all of these and others.  So it can be hard to tease out the effects of various types of training on RE, independent of their effects on the various physiologic systems in play.  Another problem is that RE is, at least in part, dependent on anthropometric/body composition characteristics.  (Not just being lighter, but having long legs relative to torso length, with thinner ankles and calves relative to the quadriceps, which imparts a biomechanical advantage, and which you can't really do anything about.)

The good news is that there is some evidence that almost any kind of training has a positive effect on RE.  Indeed, there is some suggestion that simply cumulative mileage over many years leads to enhanced economy.  (Although on the flip side, RE decreases with age, likely due to a reduction in the ability to store and use elastic energy...it gets complicated pretty quickly.) And interval (VO2max) training, LT training, and resistance training have all been shown in various studies to improve RE, though the relative benefits of training at various intensities remain unclear.  Resistance training has demonstrated positive effects on RE, although again, we have yet to define the optimal method by which this takes place.

So, your take-home points:

If you're interested in this stuff, and want to read a much more coherent explanation of these variables than I can provide, try this post from the inimitable Ross Tucker.

And just a reminder to cast a vote for your friendly neighborhood Blogger of the Year.

Posted by gunksrunner at 3:26 AM